Jubaea Newsletter
‹ ›
You are here: Volunteers >> The Gardeners

In the late 1980’s Geelong Botanic Gardens and Friends together took over the two narrow garden beds on both sides of the central pathway near the Hitchcock Fountain, to establish a Perennial Border.

By the mid 1990’s, there was a band of regular and enthusiastic Friends volunteering; planning, buying plants and maintaining the Border with minimal help from the Gardens staff. The Borders were widened or enlarged in 2001 and 2014. This allowed a greater variation in the height of plants selected.

Today you will find the Perennial Border is planted with a wide variety of plants. Most are traditional perennials while some are shrubs which add structure and are more permanent to give the display year round appeal. Plants are selected for their colour, shape, texture, form and hardiness. Plant selection is ongoing as it is important to showcase plants which can be grown in the Geelong region with relative ease. Drought hardiness is an important factor, however we find that the irrigation system in the Gardens encourages lush growth which may not show the true growth habit in a drier environment.

The Perennial team is always seeking keen volunteers to join them on Wednesday mornings. There are friendships to be made, weeds to manage, dead-heading and trimming of those plants eagerly claiming more space than desired. The Perennial Border plants are a valuable resource to the Friends’ Nursery where they are propagated and grown on for sale to the public. 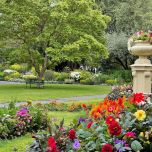 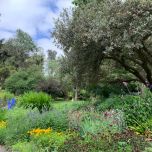 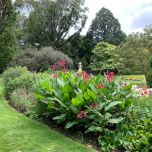 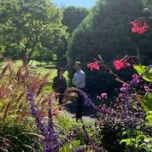 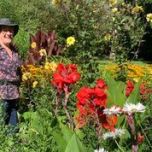 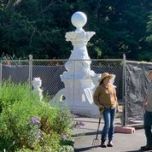 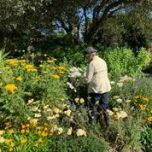 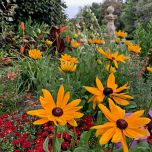 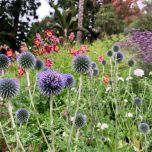 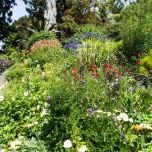 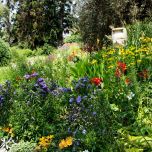 In 1997, the Western District branch of Heritage Roses was given the opportunity to redevelop the rose beds in the Geelong Botanic Gardens.  The layout was redesigned, creating ten beds in which approximately 300 roses were planted.  Placed in groupings, varieties progress through the species roses on the lower beds through to the more modern breeding of David Austin on the upper beds.

The Heritage Rose group funded the purchase of all plants until 2012.  However, in the winter of 2013 it was decided that the first two garden beds, which are filled with R. Iceberg, needed rejuvenation.  We are indebted to the Friends of GBG who agreed to fund the new planting and have also agreed to fund any future replacements.  These beds are now looking fantastic.  Western District Heritage Rose Group membership has declined considerably over the years but we continue to maintain the rose beds, meeting regularly to ‘dead head’, feed and prune.  When necessary, such as during the recent heat-wave (January 2014), extra days are needed to ensure the beds are at their best.  Winter requires a big pruning effort. All members of the Heritage Rose Group are also members of the FGBG, this assists with the supply of new plant material and provides the necessary support for a volunteer group working in the Geelong Botanic Gardens.  It is one of life’s great pleasures being “at the Gardens’’, we all enjoy working as volunteers at the GBG.

The Silver Border was established in 2010 to celebrate the Silver Anniversary of the Friends, since forming in 1985. This Border is comprised of two narrow beds on either side of the main East-West central pathway that stretches from the Hanson Gates to the Rose Garden.

The Silver Border is very popular as it showcases a large variety of plants that have silver, grey, white or bluish foliage. Generally, these plants possess qualities that enable them to grow in a hot and dry environment.

The Silver Border is curated by the Gardens staff and is a valuable resource for the Friends’ Nursery where the volunteer Growers propagate these plants for sale. 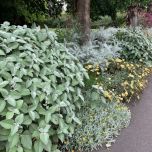 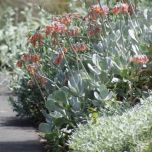 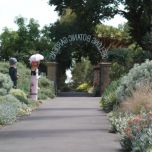 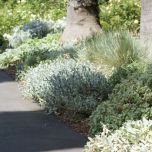 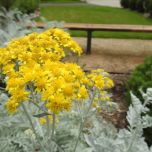 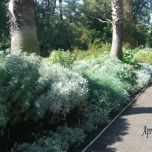 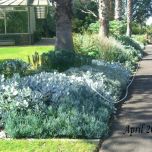 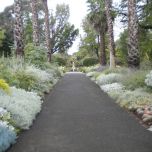 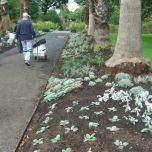 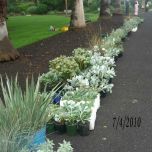