Jubaea Newsletter
‹ ›
You are here: Archives >> The Friends' Teahouse

The Friends’ Teahouse in the Geelong Botanic Gardens was opened in 1992; the realisation of one of the first objectives of the Friends when it formed in 1985.  The small group of Friends was encouraged by the GBG Director, Ian Rogers, to work towards the establishment of a kiosk to encourage visitors to come to the Botanic Gardens.  A Teahouse also provided the Friends with a venue for engaging with the public, providing information about the Gardens and selling merchandise.

The first challenge was to raise funds to build the Teahouse.  The capital was built through plant sales from the Growing Friends, bus tours, the Annual Winter Lunch, donations and subscriptions.  It was also a time of high bank interest rates.  At first, morning and afternoon tea was served by the Friends from a thermos at a bridge table and offered to visitors after they had enjoyed a guided walk.  During the early days, the Friends purchased a tent and set it up on the front lawn, to facilitate hosting activities.

Building commenced in 1992 after much debate between the Friends, Ian Rogers and the Council on the size and location.  A modest design by Cr Peter Lockyer was agreed upon, at a cost shared between the Geelong Council and the Friends.  This was in the era prior to local government amalgamation.  The Friends contributed $17,000 and added a further $3,000 to set up the facility.  The President of the Friends, Jayne Salmon, cautiously agreed to the Director’s request that the Teahouse be staffed seven days a week by our members.  This was a daunting task for such a small group.  A Teahouse Co-ordinator needed to be found and a new group of volunteering Friends organised to serve tea and cakes.

The Friends’ Teahouse opened for business on October 5 1992 under the co-ordination of Pam Jackman, who was paid a small “honorarium”.  Weekends became the busiest days and more volunteers were always being sought.  An extended menu was introduced mid 1993, including toasted sandwiches, raisin bread and soup.  With skilled management and friendly service, the Teahouse grew to become a popular destination for locals and visitors to Geelong.  The Visitors Book records the visits of garden enthusiasts from around the world.  Betty Lester-Parish, Sandra Camm and Helen Glare managed this special place between January 1985 and January 2004, assisted by many volunteers.

In October 2002, the Teahouse celebrated its Tenth Anniversary and many Friends including the late George Buller and his wife Valerie, the late Madge Young, Olive Smith, Dawn Martini, Jill Holt, Dianne O’Grady, Jenny McCallum, Wendy Appleton, Gillian Gubbins, Nancy Neagle, Peg Spittle and Julie Rogers were acknowledged for their long years of service.  As business increased, there was need for more space.  In 1997, the City of Greater Geelong built an extra store room at the rear of the building at a cost of approximately $35,000.  The Friends funded two further internal modifications and one external change in 2006, including improvements to drainage and the outdoor seating area.

Huge demands were placed on the Teahouse when the 21st Century Garden opened in September 2002, as the number of visitors to the Botanic Gardens escalated.  A larger cafe with undercover seating was required, but in the meantime the Teahouse volunteers adapted and innovated with the resources available to them.  In 2005, the Friends funded and undertook a visitor survey to determine interest in a catering facility at the Gardens.  Architects McGlashan & Everist developed a Concept Plan for modification of the Walter Conservatory and, in response, the Friends developed a business case for the Conservatory Cafe.  Shortly after, the City approved the 2007 Strategic Plan for future development of the Geelong Botanic Gardens and Eastern Park, confirming the need for a visitor centre and cafe within the wider precinct.

Penny Fawcett managed the Teahouse until April 2005, when Jan Perry was employed as Teahouse Manager.  In this role, Jan brought excellent catering and people skills.  As well as coping with busloads of visitors, Jan introduced High Teas which enhanced the reputation of the Teahouse.  In 2008, Jenny Le Page was appointed Assistant Manager and others were employed to assist Jan for the busy weekend trade.  Phyllis Unsworth organised the volunteer rosters and offered support where needed.  Many volunteers gave over ten years of service to the Friends’ Teahouse.

In January 2012, the Friends reluctantly handed back the Teahouse keys to the City.  The Teahouse needed to respond to changes in legislation regarding the preparation and handling of food.  It had also become increasingly difficult to maintain the volunteer roster for seven days a week.  Added to this were changes in expectations of our visitors, especially for espresso coffee.  This would require an espresso machine with special training, a service our volunteers could not be expected to deliver.

A Garden Party was held on 28 February 2012, hosted by the City and the Friends to celebrate and recognise the considerable contribution of the many people who assisted at the Teahouse during the 19 years of the ‘Friends’ Teahouse’.

Jan Perry and Sue Keith (Teahouse rep on the Committee) formed a group of ex-Teahouse volunteers (“Teahouse Tarts”) to maintain contact and friendships between the many volunteers who had worked at the Teahouse.  This group meets several times a year, and their activities are still well supported.

Since January 2012, management of the Teahouse has been with the City and the premises are leased.  The Teahouse provides a soul for the Botanic Gardens. It is a meeting place for all, a place for laughter and a place of memories and tears. The north facing site, nestled into the fern glade adds to its charm. 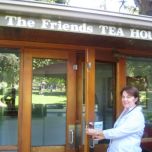