Jubaea Newsletter
‹ ›
You are here: About Us >> Committee

Ten members, elected at our Annual General Meeting in August 2021, form the Committee of Management of the Friends of Geelong Botanic Gardens:

The Committee offers activities and events including: the Geelong School of Botanical Art classes, Through the Garden Gates tour, an evening Talks Program, Tours and Winter Luncheon. It also manages Friends’ staffing and administration and works in partnership with the City and the Gardens. The Friends of Geelong Botanic Gardens Incorporated is the Trustee for the Friends of Geelong Botanic Gardens Gift Fund.

Annual General Meeting, 30 August 2021 Because of Covid-19 restrictions, the Friends’ Annual General Meeting for 2021 was held on-line via Zoom.  Nearly forty members attended, to receive the Annual Report, Financial Reports and to vote on a Special Resolution. The resolution, which was accepted unanimously, was to amend the Friends’ Rules and Purposes, to allow new memberships to be made online as an alternative to hard copy. Thanks were given to out-going Committee member Libby Hogg for so generously contributing to the management of Friends of Geelong Botanic Gardens. A presentation of flowers was made after the AGM, acknowledging their years on Committee.

Sincere thanks to all members who attended this very unusual Annual General Meeting, allowing a quorum to be reached to enable the passing of the Special resolution. 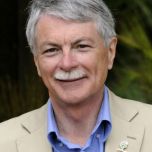 Since 2013, Dr Philip Moors AO has been the Patron of the Friends of Geelong Botanic Gardens. Philip was a former Director and Chief Executive of Royal Botanic Gardens Melbourne and has a long association with Geelong Botanic Gardens and Geelong Friends. We greatly appreciate the advice and assistance that Philip has given us over the years, including our planning as hosts of the 2016 AAFBG Conference and chairing elections at the Friends’ Annual General Meetings.

Following the 2013 AGM, confirmation was received from the Registrar of Consumer Affairs Victoria (CAV) that our new Rules and Purposes had been approved, without alteration.

At the 2014 AGM, the Committee proposed some further alterations and the Friends voted to broaden the scope of our Purposes and Rules and our Gift Fund Trust Deed to include Eastern Park. This change recognises the City Fathers’ original intention that the Botanic Gardens occupy the entire 20 acre site, part of which is now Eastern Park. This change received ratification from Consumer Affairs Victoria and the Australian Taxation Office, although Eastern Park cannot be included in any distribution from the Gift Fund.

At the 2020 AGM, the Friends voted to include a clause in the Rules and Purposes, to allow new memberships to be applied for online as an alternative to the existing hardcopy Membership Application. This Special Resolution will not be effective until it is approved by Consumer Affairs Victoria.

The FGBG Members' Handbook is for all our members and is written for Friends enjoying the Gardens and working together. It has three messages:

We hope you find it helpful and welcome your responses. Like our Website, the Handbook will always be a work in progress, as we grow and change.

The Committee has developed Policies to assist in the management of the organisation, for the mutual benefit of our members and our staff.  Members can access these policies at the office and current policies include:

The Friends, in partnership with the City of Greater Geelong, also observe the City's policies and procedures in volunteer workplace matters such as: