Jubaea Newsletter
‹ ›
You are here: The Conference

After all the accolades we rec 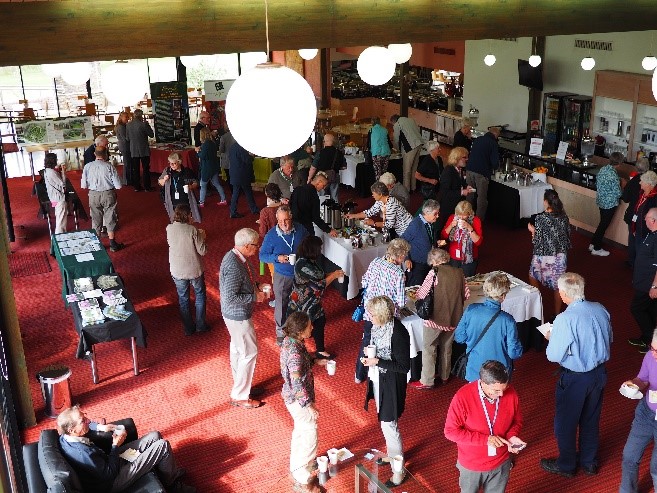 eived regarding the efficient running and clockwork precision of the Conference, the Geelong Friends are very disappointed that we did not have the opportunity to properly close the Conference, with everyone present. The AAFBG AGM was the time when the Conference host stepped back and the Annual General Meeting was organised and run by the Association administration team. The extended AGM meant that we had no chance to say goodbye and safe travels to all of the wonderful people who attended. We are particularly sorry that we were delayed in getting back to the Friends’ meeting room and nursery and so could not offer the relaxing time with refreshments promised before Batwatch. Our sincere apologies.
So, we would like to take the opportunity to finish on a very positive note by highlighting some of the lighter moments, photos and moments that have received the most anecdotal comment from participants. Our Stop Press Bulletins with humorous “snippets” was a hit for many.

Did anyone actually partake in International Nude Gardening Day on Saturday 7 May, as mentioned in the bulletin??

The Geelong Conference Centre, right on our doorstep in Eastern Park, received much praise for its very attractive location, the high standard of the lunches and morning/afternoon tea and the facilities it offers.
We wonder if you can guess which Friends group member, who did a 5 minute presentation just before the AGM, emailed our tech support person with the following – “I was very impressed by my first AAFBG conference. It was something that FGBG can be proud of. But I think that there was insufficient acknowledgement given to the technical dogsbody. I am deeply indebted to you for saving my bacon. I am also indebted to my wife who found my original PPP on my computer and who sent it as a PDF attachment while the after-lunch session was in progress.” Talk about last minute – but the dogsbody did well!! 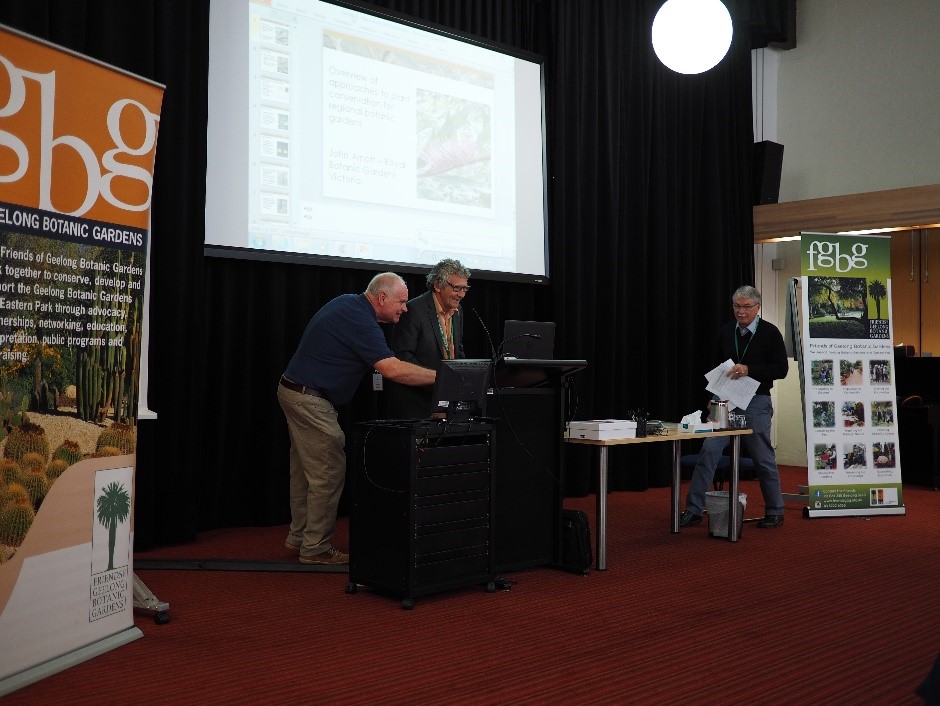 The food served at the Welcome was a real winner – 7 fillet mignon tidbits by one member appear to be the record! Even the sudden absence of our mayor to welcome everyone did not dampen a lovely evening. Our guest speaker at the Dinner, Jacqui Young, received very positive responses – “inspirational” was a term used by many. Hearing the passion from one so relatively young is encouraging – it keeps us in touch with the up-coming generation. ‘How refreshing to listen and not be distracted by a presentation’ was a common comment.

Perhaps the most enthusiastic compliments have been about the three tours that we offered. On each trip we included places that the general public cannot access and they appear to have started off with the Bellarine tour described as “fantastic”, the Otways “even better” and the Western Plains” fan- bloody-tastic!” One of the curious things that happened was on the Otways tour. Chatting over a cuppa at the Melba Gully Garden B&B where we had an inspiring garden tour and wonderful lunch from the Otways Historical Society, we discovered from her husband that garden owner Virginia Atkins was the first female apprentice at Geelong Botanic Gardens, in the 1970’s. Spooky!!

We did go a little bit from the sublime to the ridiculous however. The tour of the Melbourne Water Treatment RAMSAR 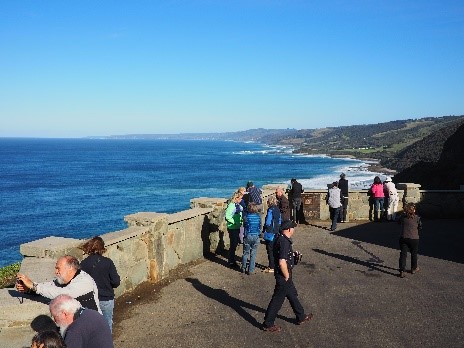 site on the Western Plains tour showcased a display of thousands of water birds before they migrate north for the winter - an amazing sight. The grey headed bats were supposed to put on a matching display with tens of thousands expected to do their usual nightly sky-filling routine on the Sunday evening. But the thunderstorm the night before frightened all but a few dozen into staying put for the night. The mozzies were more plentiful! But pleasant company and a chat was a nice way to finish the Conference for the hardy souls who stayed on. Thank you for your company.

The guided tours through our historic botanic gardens also received wonderful reviews. The training and knowledge of our dedicated Guides was frequently mentioned – the research involved is an important part of the walks that the Guide offer on a regular basis. Collaboration with garden staff to increase the diversity of tours is producing some excellent outcomes. Tours at the Library/Heritage Centre and FGBG School of Botanical Art Exhibition at the Geelong Art Gallery impressed and delighted everyone.
The Q&A forums were intended to introduce new speakers from a range of backgrounds, with the idea of providing something of relevance to as many member groups as possible. Including a sitting Councillor, Jenny Houlihan, received many complimentary responses. The number of questions to the Governance and Compliance forum indicated the importance of this to all groups. 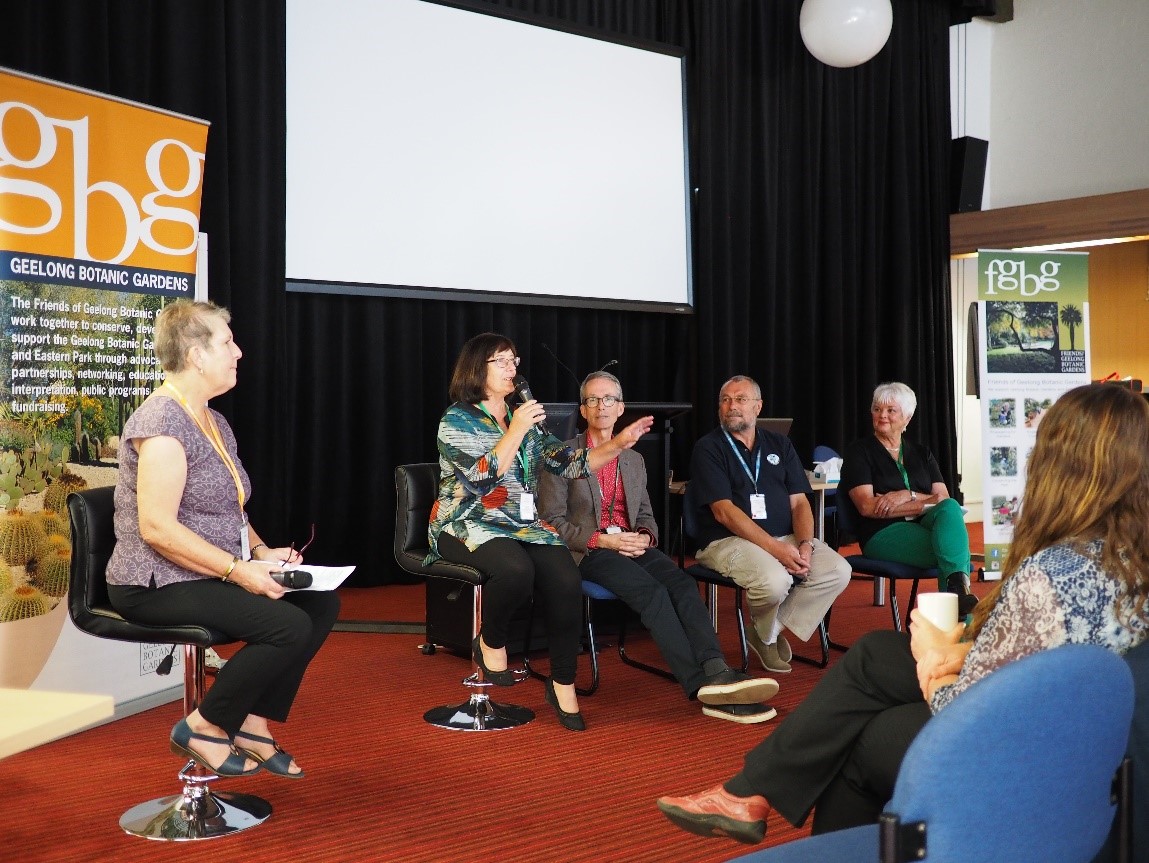 We also received a lot of positive comments about the speakers’ presentations. The sobering messages of some speakers regarding the effects of climate change was tempered by others who showed us the amazing work of dedicated people harnessing people power. This neatly related to Tim Entwisle’s message to all member groups to extend the use of social media to reach a wider membership. Some members mentioned that they wanted more focus on growing memberships and we hope they don’t dismiss Tim’s suggestions. Conferences are about keeping people informed and educated and stimulating new discussions about what direction we might need to take. The one big message this conference made is that plants and people evolve with the times if they are to survive.
The good thing about volunteering is that you can have a lot of fun and satisfaction while that is happening!! It was wonderful to see so many people making and renewing friendships. Putting faces to names you have heard about is something that AAFBG Conferences do so well. This is one of the many reasons to support the 2018 Conference and we wish the next hosts every success. 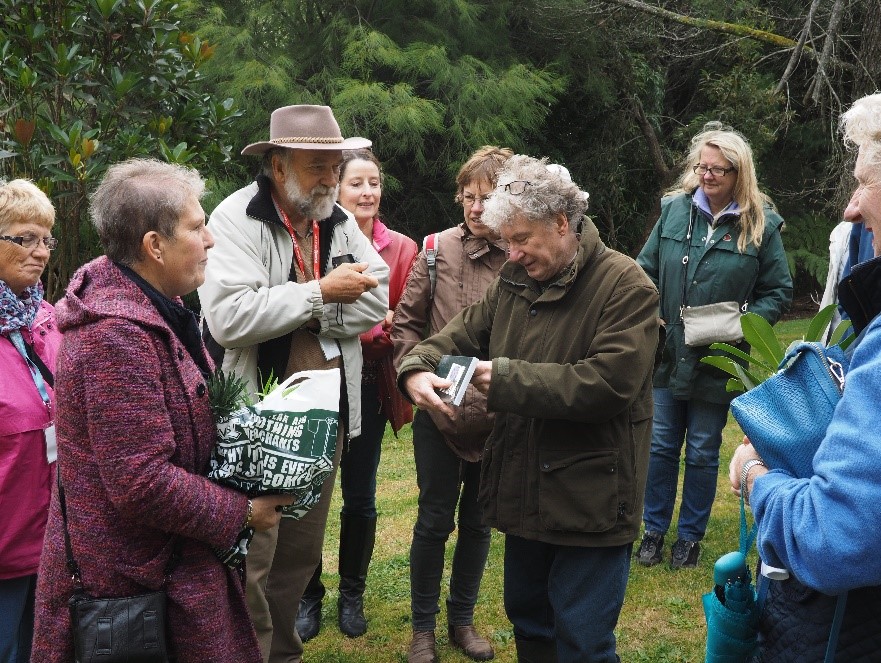 We hope you have enjoyed this snapshot of the 2016 AAFBG Conference hosted by the Friends of Geelong Botanic Gardens. But most of all, we want to say thank you to everyone for coming to Geelong. It has been the Friends’ great pleasure to show you where we live and where we spend our time volunteering in this very special place. We have compiled a comprehensive Conference Report for the Association which will assist the next host in planning another engaging and informative Association Conference.

*Alistair Watt has worked with the Friends for many years, but most have not had the chance to meet him or visit his Otways Arboretum.

Thank you for your participation and good will.

Committee of Friends of Geelong Botanic Gardens. May 2016.